Come to Relaxing Yoga Saturday 1/28 at 8am

Ginny: Recently, when I was going on vacation, Annie volunteered to lead the Lewsinsville group in exercise. I sent her the workouts and she happily counted out the reps and kept the class moving. She shows up just about every Tuesday and Thursday for class -- rain or shine. If she has an obligation that interferes with our class Annie always lets me know ahead of time and of course class just isn’t the same without her! I’ve watched her go from a true beginner to one of the strongest in the class. I knew Annie had gone through a transformation: I just didn’t realized how much she’d changed.

Annie: I feel like Ginny’s groups (even outside my own Tu/Th class) are family, and don’t mind sharing all that brought me to her wonderful program! I joined in October of 2008. I had been through a lot in my life and decided I needed to redefine myself in ways that would include taking charge of my health—both emotional and physical. 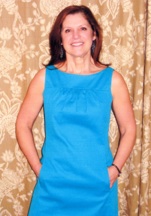 My husband Joe had been diagnosed in Nov of 2006 with AML (acute myelogenous leukemia). We practically lived at Johns Hopkins Hospital for the next year and a half. About eight months later I was diagnosed with Stage I breast cancer. I got the best “bad news” I could get though—a small tumor, hormone receptor positive and no nodal involvement. I had the gamut in terms of treatment—surgery (lumpectomy) followed by four rounds of chemotherapy and then 33 radiation treatments.

My last chemo treatment was in November 2007, and I lost my Mom rather unexpectedly three days later. Since my husband had undergone many rounds of chemo himself, he knew what to expect and was very supportive, both in practical and loving ways. Yes, I did lose my hair and I decided to go blond (I am really a brunette)! What a hoot! I looked pretty hot, and both Joe and I got such a kick out of it. Joe and I reflected on all that had happened to us, and we jokingly but appropriately called it our “Job” time (after the man in the Bible who gets hit with all kinds of bad).

Joe died in May 2008. That was hard. I met him when I was 16, married him just as I turned 21, and we’d been together for 35½ years with 2 grown kids. I am a very positive person though, a “glass half full” kind of person, so I decided to take advantage of a free month of Ginny classes I won at an auction, just to do something different and whip myself back into shape. Having done a lot of reading about breast cancer I knew that diet and exercise were going to be crucial in preventing any recurrence.

The first month was grueling. I could barely do anything! I stuck with it though, because I was so darned stubborn and determined. Sometimes the exhaustion and physical effort would bring tears to my eyes, but it was also a way of releasing a lot of pent up emotion. Ginny was very supportive and so were the other women in the class, some of whom knew what I had been through. I can’t believe I’ve been with Ginny for 2½ years! It doesn’t seem like that long.

What have I gotten out of Ginny’s classes besides awesome muscles, physical strength and stamina? Confidence, wonderful support, new friends, lots of great advice on diet, homeopathic treatments, yoga, good book and movie recommendations, and a referral to the best chiropractor in the area (Ray Solano). It has also helped with my ongoing healing process. I am forever grateful to Ginny and everyone I have met through her program. I’m in till I die!

Ginny, I wanted to thank you and the other “gals” for the kudos on Thursday morning. I feel there are 2 things that need to be in place for someone to remain committed to an exercise program like your boot camp. There has to be results AND there has to be encouragement and support, both from the instructor and from other members of the group. If you see results but you don’t have the camaraderie, then exercise becomes a drudgery, and you won’t keep up with it. If you have a good time in class but don’t see results, then it’s a nice social hour, but it won’t be enough to keep you committed to the program. What’s so nice about your class(es) is that both of those elements are there. You know that I had been through a very challenging year when I joined BbG in Oct of 2008. I’m still coming to class 4½ years later because I have seen results AND I so enjoy the other women I have met through the class. I also get to see the positive impact it has had on their bodies! After several months I can actually see shapes change and people getting stronger. I have to make more of an effort to be as encouraging to my “classmates” as they have been to me.

Have a good weekend and see you next week!

Ginny: Carol joined BbG in 2006 at Madison Manor Park. Try though she might, she could never seem to remove the extra weight that she knew was dragging her down. She exercised a few days a week at first and then started running with her pals, whom she refers to as the “McKinley Moms.”

Last spring Carol began to feel unwell. Although her doctors couldn’t tell her exactly what was wrong, they did say she had to make some major changes if she wanted to feel better and live longer.

Carol: “Eat less and exercise more" has been the only reason I'm losing weight (and maybe the vitamin B-12 resetting my metabolism?). I basically cut out all extra calories, including alcohol, chocolate (hard to give up but I don't miss it anymore), and other unhealthy snacks. I have my oatmeal with fruit in the morning, usually a salad at noon and then a normal dinner -- chicken or fish, vegetable or salad, and sometimes a starch (can't give up that rice!). I'm also drinking lots of water -- again on doctor's orders.

I think  the main thing though is upping the frequency and intensity of exercise. I've been pretty good about getting to class three times per week and when there -- you've probably noticed -- I really concentrat on using the cardio workout to the max.

Also, running with the "McKinley Moms" Monday and Friday, running on my own on Weds and Sunday, and making sure that I run at least an hour on Sunday has gotten me back in the swing of exercising about 40-60 minutes every day, which I had kind of moved away from after my son was born.

Feeling so bad in the spring was really a big incentive to get healthier. I wouldn't recommend it, but a health scare like that certainly provided me with an incentive to change.

Ginny: Carol has lost 25 pounds since March 2009. In December she ran the Jingle Bell 10 K with her running pals. Congratulations Carol.  Keep up the great work!