Come to Relaxing Yoga Saturday 1/28 at 8am

Founder and owner of BbG Fitness. Ginny loves helping people discover how empowering it is to be strong. Her goal is to make fitness fun for everyone and to teach people that through diet, exercise and a healthy life style they have the power to heal themselves and be the healthiest person they can be inside and out. She earned her Health Coaching certification in 2009 through the Institute For Integrative Nutrition in NYC. Certifications: Personal Trainer, NSPA; Group Fitness Instructor; Certified Holistic Health Coach, Adult CPR

Amy has been involved in sports her entire life. She played Division 1 college soccer and today coaches two Arlington youth soccer teams. Since joining BbG in 2006, she has seen her overall fitness rise to new levels! Amy is passionate about inspiring others to achieve their ultimate fitness goals. She feels this boot camp style exercise is an extremely effective and fun way to get fit, for athletes and non-athletes alike. Amy co-teaches the MWF 6:00 a.m. BbG class at Stewart Park, and enjoys running in her free time. Amy is also a very proud and busy mother of four. Certifications: Personal Trainer, Adult CPR

Tammy has been a life-long athlete and fitness enthusiast. She played Division III field hockey in college and continued her passion for competitive sports by playing in local volleyball leagues and coaching high school field hockey. Tammy spent ten years teaching elementary school before having twin daughters. She enjoys running (recently completed her 9th marathon!), biking and yoga. She became a “BodybyGinny” junkie because of the total body work-out and the ability to exercise outdoors. Tammy has been a BbG instructor since 2007 and co-teaches at Hayes Park. Certified Personal Trainer, Adult CPR

Christa has been an outdoor fitness enthusiast all her life. She counts hiking, bouldering, trail running, mountain biking, and cross-country skiing among her favorite outdoor sports. She’s run more races than she can count but is particularly proud of her all-female team’s first-place finish in the Trestle Valley Marathon held in Minot, North Dakota. She also competed in the first annual Colorado State Olympic Games in the two-person sand volleyball category winning a silver medal. After graduating from law school, Christa joined the Air Force and served as a judge advocate general for over eight years. Before separating from the military to take care of her son full time, she taught at the United States Air Force Academy in Colorado Springs, Colorado where she served as an Associate Air Officer Commanding for Basic Cadet Training (translation: she helped teach boot camp to incoming cadet candidates) and the Officer Representative for USAFA’s women’s swim team. Christa shares the Hayes Park class. Christa has been a BbG instructor since 2007.

Alyss has been a part of BbG since 2012, first as a student, and now as an instructor. Preferring to exercise outside, Alyss was thrilled to find BbG when she moved to Virginia from Texas. Alyss enjoys racing in triathlons, and in her free time, you’ll find her hiking, running, swimming and biking with her husband and daughter. Alyss is passionate about staying active and eating healthy, and hopes to motivate others to do the same. Alyss leads the evening class at Bluemont Park.

Emma loves all things fitness and health! When she's not busy working at the Rosslyn BID as the Business Engagement Manager she's either at a spin class or yoga class, running around Arlington or cooking up something super-healthy.  Emma is a certified Barr instructor and has been leading BbG workouts for the past 6 years. 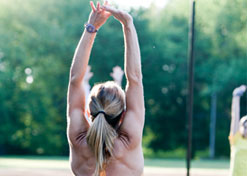 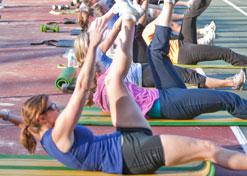 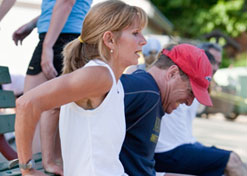